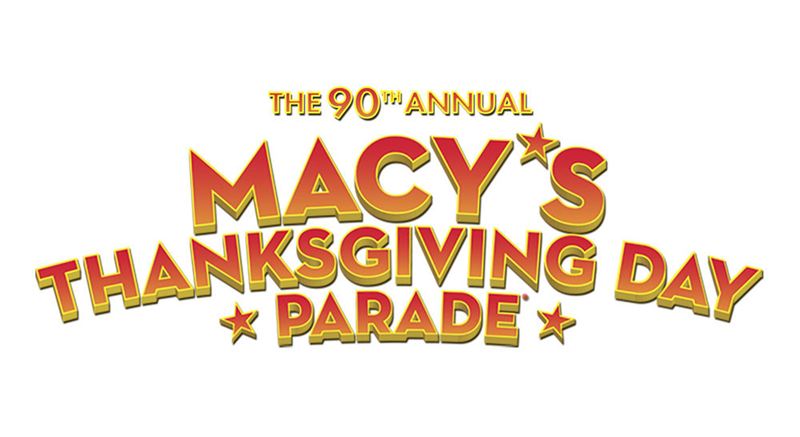 NEW YORK – Nov. 1, 2016 - This November, America’s favorite holiday tradition will mark a milestone anniversary, once again kicking off the holidays with its signature brand of magical entertainment. On Thursday, Nov. 24, (9 a.m.-noon in all time zones), the 90th Macy’s Thanksgiving Day Parade® will march down the streets of New York as millions celebrate with family and friends. Matt Lauer, Savannah Guthrie and Al Roker of NBC’s “Today” will host the broadcast. In addition, Telemundo will simulcast the parade in Spanish with the event hosted by stars Jessica Carrillo and Carlos Ponce.

The unparalleled spectacle is set to enthrall more than 3.5 million spectators lining the streets of Manhattan and more than 50 million viewers on television, with a host of giant character balloons, dazzling floats, the nation’s best marching bands and performance groups, celebrities, and the official entrance of the one-and-only Santa Claus.

As the Parade gears up to takes its 90th march down the streets of Manhattan, very special guests will take to the streets like they’ve taken the world by storm for decades. The iconic Kermit the Frog, Miss Piggy, Fozzie Bear and the rest of the Muppets will dazzle and delight millions of fans as they kick-off the celebration as only they can, with their signature musical and comedic revelry. Joining executive producer Amy Kule at the head of the Parade as she cuts the ribbon opening the march, will be U.S. Paralympic stars Tatyana and Hannah McFadden.

Joining the Parade as a signature element kicking off the holiday season will be the world-famous Radio City Rockettes®. The national broadcast would not be complete without showcasing the best theatrical productions. Set for 34th Street performances will be “Cats,” “Holiday Inn, The New Irving Berlin Musical” and more of Broadway’s best. In addition, viewers will get a sneak preview performance from NBC’s “Hairspray Live!,” which premieres Wednesday, Dec. 7 (8 p.m. ET/PT).

“We’re thrilled to once again broadcast the Macy’s Thanksgiving Day Parade as it celebrates 90 incredible years of providing an unmatched spectacle for families across the nation,” said Doug Vaughan, Executive Vice President, Special Programs and Late Night, NBC Entertainment. “The 90th procession marks an extraordinary milestone in the history of the parade and New York City, and we can’t think of a better way to kick off the holiday season.”

Since its origin in 1924, the Macy’s Parade has marked the official start of the holiday season, introducing a cherished march of magic that has dazzled generations of fans. For the 90th edition, the famed spectacle’s line-up will feature 16 giant character balloons; 27 novelty/ornament balloons, balloonicles and trycaloons; 26 floats; 1,100 cheerleaders and dancers; more than 1,000 clowns; and 16 marching bands and performance groups.

“This year, as we celebrate 90 years of magical moments, we are truly humbled by the unique role the Macy’s Thanksgiving Day Parade fills in the lives of millions worldwide, and we are thrilled to celebrate this special milestone with a spectacular line-up filled with amazing new and commemorative elements that will continue our storied legacy of unparalleled holiday entertainment,” said Amy Kule, executive producer of Macy’s Thanksgiving Day Parade.

Let’s Have a Parade™

For nine decades Macy’s Thanksgiving Day Parade has been a march like no other by bringing generations an unrivaled procession filled with more than 8,000 volunteer participants dressed as clowns, strutting their stuff in a marching band or escorting the Parade’s signature giant inflatables and floats of fantasy into the hearts of millions. Originally known as the Macy’s Christmas Parade, the tradition was started by Macy’s employees who wanted to celebrate the holiday season with a grand pageant similar to the over-the-top carnivals and festivals of Europe. The first Parade featured fanciful floats, employee marching bands, clown groups and real animals from the Central Park Zoo. Stretching from Harlem at 145th Street and Convent Avenue down more than five miles to Macy’s Herald Square, the first event was such a success that it was deemed by Macy’s to be an annual event from there on forward. While many elements have grown and been adapted over time, the heart of the Parade has always involved Macy’s own employee volunteers, talented marching bands and dazzling floats – elements that have paved the way for imagination and grand spectacle. One of those jaw-dropping additions came in 1927. Replacing the live animals, who some said scared children along the route, the Parade introduced its first inflatables, debuting four giant balloons filled with air and carried on sticks down the route. That inaugural balloon line-up included the first-ever character based balloon featuring the likeness of famed animated film star Felix the Cat. To make the balloons lighter than air, the following year helium was added, helping the giants float down the route.

Since its inception, the Parade has marched during tumultuous periods in our collective history. Only one event has ever caused the cancelation of the Parade and that was World War II. During a three-year period from 1941-43, the event was put on hold due to the rationing of supplies such as rubber and helium and a moratorium on large public gatherings. After its brief hiatus, the Parade returned and grew in worldwide fame becoming even more synonymous with the holiday season after its starring role in the 1947 film classic “Miracle on 34th Street.”

The Parade’s signature giant character balloons have showcased the world’s most beloved cultural characters since the late 1920’s. Evolving from a simple paper sketch to giant wonders on Thanksgiving morning, the balloons are transformed by Macy’s “Balloonatics” into high flying art.

This year, three new giant characters will take center stage including the return of Peanuts loveable blockhead Charlie Brown and a colorful and whimsical Diary of A Wimpy Kid®, as well as the debut of the stars of DreamWorks’ “Trolls” in a multi-character balloon.

The balloon line-up will also feature the return of the Parade’s first balloon star as DreamWorks Animation’s Felix the Cat. Designed and built using the same methods from the late 1920s, Felix will make his way down the route as he first appeared, carried on sticks, mimicking his debut appearance in 1927.

The late 1960s saw a creative renaissance for the Parade, following the establishment of Macy’s Parade Studio. Home to incredible artists including carpenters, painters, animators, metal fabricators, scenic/costume designers and electricians, the Studio team took over the primary task of design, construction and maintenance of the Parade’s elements, previously done through a combination of external resources and internal talent. For more than four decades, Macy’s Studio was housed in an old Tootsie Roll factory in Hoboken, N.J., before moving to a new state of the art facility in 2011, where the team continues to evolve the design of the larger-than-life elements. Macy’s floating wonders create a collection of magical delights that dazzle and transport spectators. The painstaking process of creating a Macy’s Parade float is both a creative and technical endeavor. Macy’s Parade floats are often three-stories tall and several lanes of traffic wide, but must collapse to no more than 12 ½-feet tall and 8-feet wide in order to safely travel from the New Jersey studio to the Manhattan starting line via the Lincoln Tunnel.

This year four new floats will debut including The Aloha Spirit by King’s Hawaiian®, Building A Better World by Girl Scouts of the USA, Deck the Halls by Balsam Hill®, and Fun House by Krazy Glue®.

The magic of the Parade can be experienced across the country, as the 90th anniversary celebration extends to fans from coast-to-coast. In early November, the Macy’s Parade Time Traveler app available for free on the iTunes® App Store or from Google Play, will allow fans the opportunity to interact with history as they experience the magic of the Parade from three different eras. With the app installed, fans can use their smartphone’s camera to transport themselves to Parade’s past from the 1930s, 1960s and 1980s in amazing live-action virtual reality. In addition, the app will allow fans to take a selfie in the past, and create their own Parade by collecting historic, virtual balloons at Macy’s stores across the country.

In addition to the time-traveling app, the Macy’s Thanksgiving Day Parade stickers app available for free today from the iTunes App Store or from Google Play, or through messaging platforms including Tango, Paltalk® and Blackberry® Messenger, will add a dose of Parade whimsy to text messages this holiday season.

For an insider’s look at the holiday procession, fans nationwide should check macys.com/parade for regular updates including behind the scenes previews, interactive historical information, and more.

The 90th Anniversary Macy’s Thanksgiving Day Parade will begin at 9:00 a.m. from 77th Street and Central Park West. The procession will march to Columbus Circle, turn onto Central Park South and march down 6th Avenue/Avenue of the Americas to 34th Street. At 34th Street, the Parade will make its final turn west and end at 7th Avenue in front of Macy’s Herald Square. “A Holiday Treat for Children Everywhere” has been the guiding motto of this annual tradition for more nine decades and is one which continues to this day.

Please note: All talent, performances, elements and information included are subject to change.

For more information on the Macy’s Thanksgiving Day Parade, please visit www.macys.com/parade or call the Parade hotline at 212-494-4495. Follow @macys and join the conversation at #MacysParade on various social networks.